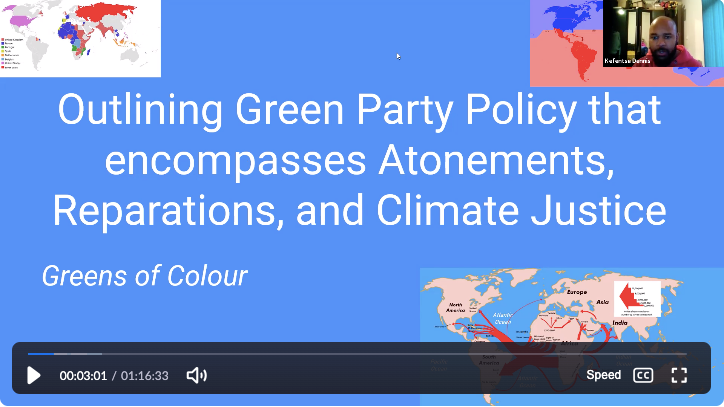 Get your round-up from the Greens of Colour at Spring Conference 2022...

Trying to make sure Green Party Conference is as high profile an event for Greens of Colour as possible has become something of a tradition for the GoC committee in recent years; the crystal clear message of Azzees Minott to Autumn Conference 2020 that ‘there is no social justice without racial justice, and no climate justice without racial justice’, and the incredibly powerful, inspiring and intersectional speech by Dzaier Neil at Autumn Conference 2021 on the absolute necessity of our becoming a much more inclusive and diverse organization in future, have done much to shift the all-too-common perception that the Green Party is just another outlet for white middle class British sensibilities.

And as the Climate Emergency becomes more and more difficult to ignore, and as ‘once in a generation’ extreme weather events become annual occurrences, more and more people from ethnic minority and ‘Global South’ communities are looking to the Green Party as the one organization that has always had the political will to show leadership in the struggle against environmental destruction, to now show leadership in the struggle for climate justice – the struggle to help Global South communities to adapt to and mitigate the effects of climate change, and also to claim reparations for the suffering, losses and damage caused by those whose economic prosperity has always come at far too high a price.

Many of us have come to realize that the best way to work for international change is to work for change at home; ‘thinking globally, acting locally’ is something that’s been drummed into our communities for generations. So in spite of some crossed wires, setbacks and disappointments, it was great to see Greens of Colour once again on the Agenda at Spring Conference, as hosts to one of the prime-time Meetings during Conference weekend.

Kefentse Dennis, GoC Chair and the Trades Union Liaison Officer for the Green Party, led a presentation to a group of over a dozen people on the theme of atonement, reparations and climate justice.  He made it clear that, once in government, the Green Party will really need to have policy on climate reparations to meet its international obligations, and that his goal as GoC Chair was to successfully navigate that policy through the next Conference.

A group of images of the transatlantic slave trade, British colonialism in Africa and India, the Opium Wars and extreme weather events here in Britain were shared to help make clear that all these phenomena were interdependent; to make clear, in Kefentse’s own words, that global warming is ‘the after effects of colonialism’. Kefentse then shared his vision of creating a coherent and holistic policy that fully explored this impact of colonialism ‘through a Green lens’, that rejected the ‘Social justice vs Climate justice’ dichotomy, and that offered reparations as one solution to this crisis.

Kefentse went on to explain that this understanding of the full horrors of Britain’s colonial past came from a recognition of the reality of white supremacism here in Britain; he went on to make clear his belief that under a capitalist system, unless ethnic minority and Global South communities in Britain supported their own businesses and institutions, instead of giving their money to white organizations, we would be perpetuating white supremacy instead of defeating it.

Although there were some concerns raised about the relevance of that approach in the context of the many contributions of time, money and energy from many ‘Greens of Colour’ to the Green Party, our tendency to ‘Buy Green’, and the validity of both integrated and multicultural economic approaches, the recognition of the need to decolonize a society that still produces leaders who openly fantasize about ‘Colonialism 2.0’ was something I’m sure we all took away from this experience.

Ammi Kaur Dhaliwal, GoC’s Policy Officer, then talked the meeting through the practicalities of the policy making process. It was great to be able to offer some insights into that process too, based on my experience of proposing policy for the Rights and Responsibilities Policy Working Group to Spring Conference, and also to be able to draw on Rachel Collinson from Standing Orders Committee’s knowledge of how motions could sometimes be accredited by SoC, meaning they would be much more likely to be voted on and then adopted by Conference.

Hopefully I helped make clear that I was sure what was most important in policy making wasn’t actually the ‘nuts and bolts’ of submitting it properly, but instead was making sure the goals of the policy being written were clear and realistic, agreed by everyone involved, that the time frame was right and that the proposals were consulted on with everyone who had experience and professional expertise in this issue that we could draw on, and whose knowledge and contributions in this area we needed to acknowledge and respect for them to lend us their support.

It was great to have something more lighthearted to enjoy after all this planning, and to be put into break-out rooms with nothing much more serious to think about than what item of clothing I’d most like to be, what Soap Opera universe I’d most like to inhabit, and how much money I’d need to retire,  was a refreshing change; unfortunately most of the exchanges on those topics didn’t make it onto the recording of the meeting.

It’s important to try to keep a sense of humour, even when a sense of perspective can be as hard to find as a person of Colour at a Green Party Conference!? But the Climate Emergency is very real, and so Conference has very serious business to do, much of which can be quite harrowing to be involved in, but that can produce some fantastic results (the Asylum and Migration Policy Working Group is a good example of that, as I hope is the Rights and Responsibilities Policy Working Group I’m so proud to belong to).

And Greens of Colour are making policy too now; so, as Kefentse so eloquently put it, ‘Watch this Space!’