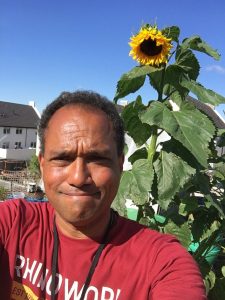 Paul Beswick was born in Whitefield, near Manchester, of a Nigerian father and 'white working class' mother who had met while students at Manchester University. Their parents were academics who liked to travel, so they grew up living in East Africa, Nigeria and Manchester, before finishing school in Cardiff. They too attended Manchester University, where they became interested in alternative systems, anti-fascism and Green politics, and stayed on there briefly as a postgraduate Economics student, before returning to Cardiff. They began studying Chinese Martial Arts then, and qualified as an MTI Massage Therapist at Cardiff Metropolitan University in 2010.

Paul became an activist for Friends of the Earth and the Green Party in the early '90s, including helping to organize Friends of the Earth's campaign against opencast mining in South Wales, and supporting the 'Roads Protest' movement in its NVDA campaign at Fairmile in Devon. They have lived by the sea in Penarth, near Cardiff, for the last twenty five years, and currently work with people with profound multiple and learning disabilities and Autistic Spectrum Conditions as a Creative Facilitator for Touch Trust, and in Supported Housing with the same group for Innovate Trust Limited.