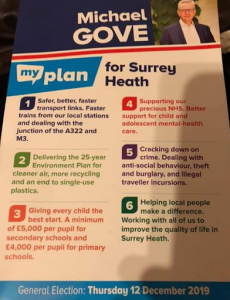 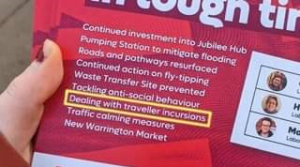 As in general, the GRT population is not taken into consideration not even during elections.

The politicians express their Antigypsyism in different ways even during the election campaigns by promoting Antigypsy policies.
This is what happened at the beginning of the actual local elections campaign. Labour Party launched in Orford a flyer, mentioning at the seventh point "Dealing with traveller incursions", same Labour Party which accused its leader of Anti Semitism, but this time is only about Antigypsyism,
Later they withdrew the leaflets and there were apologises, things that didn't happented in 2019 at the general elections campaign when Michael Gove of Conservative Party had at number 5: "Dealing with anti-social behaviour, theft and burglary and illegal traveller incursions." This time the Antigypsy attitude was more obvious by associating traveller incursion with ASB and crimes but nobody said anything, not even the opposition parties... because it is only Antigypsyism.

The Anti Gypsyism is not expressed only through obvious positions but also through ignorance. Thus many politicians, parties and government institutions to prove their "political correctness" towards GRT they limit to public declarations, just mentioning between the lines GRT and "ticking" the GRT issue. They are also inviting a few GRT Civil Society representatives who usually don't have a position and again the GRT consultation box is ticked. We never see concrete, efficient measures to tackle social exclusion.

Same things happened in 2019 when the UK Government launched The National Strategy to Tackle the Gypsies, Roma and Travellers Inequalities, a strategy which again was limited to "politically correct" declarations, without concrete measures and action plan as a governmental strategy should look like. They allocated £200.000 for six projects, most probably to the consulted representatives. Up to my estimations we are 1.000.000 GRT's in the UK. That comes £ 0.2 per person to tackle the inequalities.

In the same year, the same government allocated £ 18.000.000 for Gypsy and Travellers sites injunctions. This is the reality of Antigypsy policies in the UK.

We even tried to lobby to improve our representation at least in positions that really concern us, we have been ignored. A concrete example is the UK Government Holocaust Commission. After more than six years from its establishment, we have no Roma representative, Roma being the second largest group, victim of the Natzi regime. We've been told not to worry as we will be well "represented", but I think the commission's Co-Chair, Lord Erik Pickles, ment "presentation". We don't need a presentation as we are not extinct, we are still here!
We are ignored by the entire British society. Anti Gypsyism is not a priority for anybody, no general population, no media, no politicians, not governmental institutions. We have no representation at any level as we are subjects still of social exclusion.
I can see the change could come from the political class. Can the Green Party be the first party in the UK that could crossover empty "politically correctness" declarations and adopt a concrete position against Anti Gypsyism and launch political measures that could really tackle the GRT inequalities?