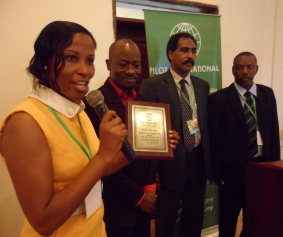 I entered politics at the founding Congress of The African Greens Federation (AGF) and Ecological Party of Uganda (EPU) in 2010 when I was elected as a Vice President of EPU. Since then I got involved in party building and organizing. In 2014 I was elected as the Treasurer for AGF. In 2016 I contested as a parliamentary candidate in Uganda National elections where I became second.

Currently I am running as a parliamentary candidate for 2021 Ugandan National elections for Kawempe North Constituency on the ticket of Ecological Party of Uganda where I am the only female candidate contesting with nine male candidates.

To give a brief background of how the political system in Uganda is genderized, at every district, women are designated a women seat where only women compete with each other. This seat is called Woman Member of parliament. Most women have gotten into parliament through this seat. Now in each district there are regions called constituencies. In Kampala District for example there are 9 constituencies, all ideally designed for men. This is in our constitution. So ideally in Kampala district you have a ratio of candidates 1 woman: 9men provided for by the constitution.

So personally I had to beat such odds by standing as a Member of Parliament for a constituency designated for men making me the only woman standing among 10 men.

Besides those odds, being a woman in the opposition makes it worse. Living under fear from government and male opponents whom you’re leading is extremely difficult. In addition financial challenges as a woman competing with men including the incumbent with more financial resources and existing political capacity is not easy too.

However I am working around these odds to see that I still reach out to the voters until the Election Day. Every Sunday I have a campaign program to visit churches and talk to the congregation there. The strategy is working for me since I am the only woman and Christian in the race. However I need to reach out to all churches before the elections.

I have attracted the electorate massively because of my campaign message which includes:
1) Supporting economic recovery of my constituency but investing some small grants into the informal sector businesses and cooperatives which have heavily been hit by the lockdown as a result of the Covid pandemic. Now most of the owners of the informal businesses are women and the youth.

2) Creation of green jobs by inspiring sustainable innovations and job creation . Before the Covid pandemic 80% of the population (mainly women and youth were unemployed). Now that percentage has increased to 90% because even those who had jobs lost them, small scale businesses collapsed and big scale ones are struggling.

3) Uganda is experiencing massive environmental degradation and climate change impacts, and being agricultural based country, this has a direct impact on livelihoods. Currently the greens are not in government, so the environment has no campaigners from within the government making environmental issues extremely vulnerable and neglected. When I win this election, this trend will change immediately.

4) Powering Uganda through renewable and clean energy sources. About 70% of the population lives without electricity especially in rural areas, despite the fact that Uganda can generate 100% energy from solar because of its location at the equator. As a party, we are campaigning for 100% of the Ugandan population to have access to electricity from renewable and clean energy sources.

Although I am in the lead, I have to keep the fire burning up to the end. I have not got any financial support from anywhere; so far I have been working with my own finances from savings from my work, and some little financial support from family members. It had pushed me up to this level and thanks to my innovativeness and on ground support.

However to have a win, I need financial support to facilitate the remaining part of my campaign up to elections date on 14/1/2021. Given the current state of violence during this election, we suspect that the elections might be rigged. To minimise this rigging at polling stations each candidate has to put at least 2 polling agents at each station. My constituency has about 140 polling stations. I need to facilitate these polling agents who will oversee the voting process. I need help so that what I have worked for is not lost.