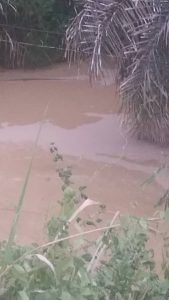 My correspondent in Ashanti Territory, Ghana, sends a picture of ""the river that runs behind my house. They have polluted it with chemical used to wash gold. The rivers used to have special species of fishes. They all died."

The correspondent who has chosen to remain anonymous , reports that the illegal miners in his area are Chinese individuals and that they are "recklessly destroying natural water bodies"... In addition, he says," they have also destroyed"some of West Africa's old forests for mining gold."

He referred me to BBC investigations that were done in April where children were skipping school in the mistaken belief that a gold haul would resolve their families' poverty. A teenager was followed by reporters into unsafe mining situations, the reporter said.

As Greens we can usefully divide the ecological issues from the political ones. The protection of forests and waterways, the maintenance of biodiversity and the provision of food are top priorities. As members of a political party we also need to speak out for national sovereignty, fair trade deals and universal living wages as measures against child labour, exploitation and educational failure. The grim irony of gold's common use as chains round people's throats cannot be forgotten, least of all by those who honour the planet and the people on it.