The last few months have been full on. It seems half a lifetime ago, but in reality it’s only been four months since I made the decision to stand for the leadership of the Green Party. There were several things that motivated that decision, but one in particular was the need for a more inclusive party that genuinely embraces diversity.

I’ve talked a lot about the stereotypes people have of the Green Party. Too often we’re regarded from the outside as a lifestyle movement for white, middle class vegans; and as a result, attract a disproportionate number of people who fit that profile. Not that there’s anything wrong with being white, middle class or vegan; but those who aren’t should not be left feeling out of place or unwelcome.

Having a membership that’s unrepresentative of the wider population can also lead to situations like the one I experienced over lunch at a regional conference. I remember listening in horror as a couple of lovely and very well intentioned Green Party stereotypes explained to me how we could solve food poverty, if only poor people would learn to grow their own vegetables and cook properly.

In order to tackle this, our party needs to go beyond a surface level approach to diversity. It isn’t (just) about how many brown faces we have on our flyers; it’s about genuine engagement with all the individual communities that make up our society, and amplifying those voices. And it’s about our party taking steps to educate members, voters and the general public about the deeper issues involved.

This is one reason I was delighted to see the Reparations motion pass at Conference last weekend. Partly because it’s an excellent policy, but also because it’s an opportunity to start a conversation. In talking to some of our members about the motion, it became clear to me that we still have some way to go before we can be confident that issues of racial justice are understood by everyone in the party; but we are at least heading in the right direction. 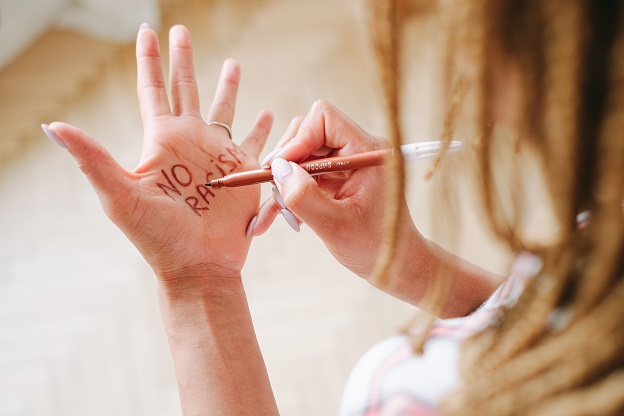 At the same time, I’ve been sad to see examples of elected Greens accidentally posting or re-posting racist comments on social media. Too often, criticism is deflected with “but they don’t have a racist bone in their body”. That may be true, but a person doesn’t need to be a racist in order to say something racist. Having good intentions is an excellent place to start, but cannot become an excuse for saying or doing things that promote division and discrimination. We all need to take responsibility not just for the intentions behind our words, but also their impact. And as a party we must be more proactive about educating each other, and holding ourselves accountable when we get it wrong.

That responsibility must not fall solely on Greens of Colour. It’s something that needs tackling at the highest levels, and one that needs all of our members to play a part. I’d like to see more than the tick box approach to diversity training that seems to currently serve as a penance for those guilty of “accidental racism”. I’d like to see real anti-racism education being proactively provided to all our elected representatives and those holding internal positions in the party, and this is something that I’m very keen to push for as AGC chair.

I’m keen to hear your thoughts. If you have ideas about what good training should look like, then please get in touch!